I'm inspired ... by pretty much every post by Zoe; by Portia and her Refashioners; and many other bloggers out there.

Up until this point I've made some purchases in charity shops - I've bought sheets that I've used as muslins, I made 2 bags out of a damaged floral tablecloth and I've found lots of zips, buttons and patterns that I've hoarded put in a safe place and am sure to use in the future.  However, I've never had a go at refashioning a garment.

Zoe told me to just go for it, that if I bought something from a charity shop and it didn't work out then the charity had benefitted and I might learn something along the way.  With such encouragement I decided to go for it.


I was attracted to the print straight away, it's pretty clear I love orange.

I thought originally I'd just try and take it in - Doris modelled and I pinned, considered, contemplated the size of the print, considered where to put darts - and then just took the scissors to it!  This is so unlike me, I'm living on the edge!  Usually I have a plan and measure, measure and then measure to check.

Well not this time, I just guessed, went by eye and made stuff up as I went along.

I loved the self covered buttons and loops - found a way to make them work - winging it all the way. 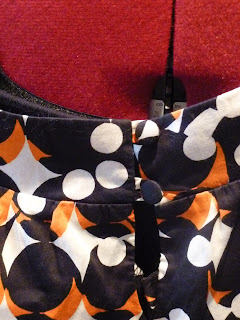 Despite my desperate sewing machine problems I managed to finish this and wore it to work last week.  It was touch and go - it took 45 minutes to get the lace on the bottom - would have been a 5 minute job but my machine wasn't having any of it.  I handstitched to get it finished.


I got loads of compliments at work - I'm so excited I told everyone it was a top in a previous life, I've had some very funny looks!

Drumroll please ... I know this isn't the best photo, I seem to have about 12 of me with my eyes shut/funny lighting etc - I really must try to do better.  Trust me, it looks quite nice on in real life!

I will definitely, absolutely, without a shadow of a doubt, be doing this again.  :)

I know I've got a long way to go to reach Zoe/Portia standards but I'm really pleased with this first effort.

Email ThisBlogThis!Share to TwitterShare to FacebookShare to Pinterest
Labels: Refashion