What should you take to Sewing Club?

The correct answer is 'a planned project' not 'everything but the kitchen sink', which was pretty much my approach!

A while back I very excitedly replied to Rachel (House of Pinheiro) because she'd posted about the possibility of having a local sewing group. Fortunately for me the suggestion was to meet in Rochester and that's not far from where I live at all - result!

There's been some planning over a cup of coffee and a piece of cake and finally last Sunday we got together for the first time to actually sew. 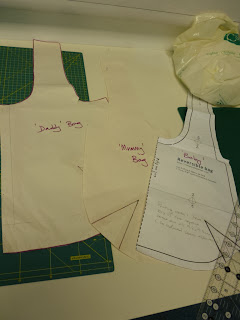 Honestly, I didn't know what to take with me. You get used to having all your stuff around you at home - I tried to plan but, in the end, kept throwing stuff in my various holdalls 'just in case'. I thought bags would be a good idea, something simple to complete, so took the pattern (and the 2 larger sizes I've tweaked a bit) that I downloaded here. I've made it lots of times before, although I don't tend to make it reversible, and I like a zipped pocket and a closure of some sort. But it is totally brilliant for adding your own touches too. 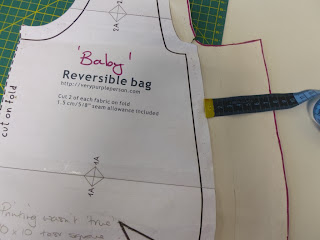 I didn't get that much done!
I thought I'd do loads in 4 hours - I had 4 bags cut out that I took with me - totally unrealistic.
There's definitely a knack to sewing in a group and it's totally different to sitting at home on your own - I might not have been terribly productive (I'm about finished on 1 bag and half way through a second)but it was really inspiring.
Emmie forgot her sewing machine power cable - despite the fact that she and I had managed to fill the back of my car with stuff and nearly gave ourselves a hernia trying to get it all to the venue! On the plus side she had pdf patterns to put together and cut out so she got loads and loads of prep done.
Rachel's experienced at group sewing and she didn't get much done either (so I felt a bit better!) but she was absolutely right, it was a really good day for swapping ideas and thinking creatively, I'm really looking forward to future meet ups. 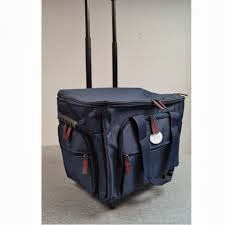 I think I might need something like this - before I do myself a mischief trying to cart my machine around but my heart yearns for something more like this ... 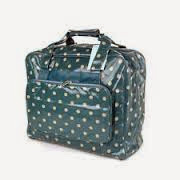 .... which is far less practical of course but it is covered in dots! I've been reading reviews (and frightening myself with horror stories about the damage you can do to your machine if you transport it!).
If anybody has any recommendations I'd be glad to hear them :)
Jacq
x
Posted by Jacq C at Saturday, November 09, 2013