A Pledge And A Beginning

I'm not much of one for New Year's Resolutions.  I love a list as much as, if not more than, the next person but I've watched too many NYRs fall by the wayside in the first week of January to have any confidence in them.  So, apart from the standard "I will not smoke" (which I've never done in my life so I'm guaranteed success!) I tend to avoid them.

A 'Sewlution' however is a very different kettle of fish.  Have you seen Karen's idea over at Did You Make That?  I am definitely in, the idea is you pick one achievable aim and Karen is going to put them all in a jar - I'm pretty sure she's going to need a bigger jar as the response has been huge.  The public nature of the declaration should keep Pledgers on track and some have committed themselves to a charitable donation if they fail.  I'm loathe to do this as I don't want to consider failure before I even get going.  However, I'm thinking a donation if I succeed might be the way forward for me.

Anyway, my pledge is to conquer my bust and make a well fitting dress before the year is out.  I have some beautiful dress patterns but have tended to avoid fitted dresses and have stuck to those that are less shaped or have just sewn separates.  Even ably assisted by Doris the Dressform I am struggling with my measurements which just don't bare any resemblance to those used for standard patterns - my Colette 'Hazel' is still in WIP form, I just can't seem to get past the gaping back issue.  But by the power of "Fit for Real People" I am determined to figure out how to make the necessary Full Bust Adjustment or Small Back Adjustment or just plan Weird Shape Adjustment - whatever it takes to have a dress that fits.

Last January (before a blog was even a twinkle in my eye, in fact before I started to sew clothes) I set myself the task of keeping an Achievement List.  It was a small shift in thinking but quite an important one for me - I went from 'Oh no, look at all the things I've failed to tick off my To Do List' to 'Wow, look how much I've made'.  Instead of crossing things off I'm adding all the time - somehow this just motivates me more.

I read last year's Achievement List yesterday and was overall pleased with what I'd accomplished, it was more than I'd envisaged.  So my 2013 list is all shiny and new and I'm ready to go... 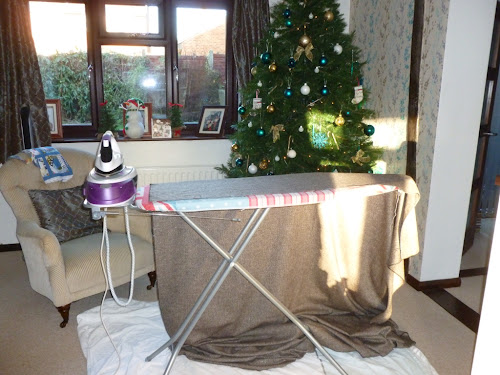 I've looked at lots of instructions online, and had some recommendations too, but decided to go with Carolyn's "Steam the heck out of it" method over at Diary of a Sewing Fanatic.

This was recommended by Gertie and made sense in my head - some things just don't and I've decided to make life easier on myself and go with the instructions that click, I find there's less cursing if I take that route!

So I decided to start this afternoon, as soon as we got home from our New Year's Eve celebrations.   I took heed of Carolyn's advice and embraced the time it would take and watched the box - the steaming took me all of 'Hello Dolly' and half an episode of 'Game of Thrones'.  I'm hopeful that this will prove to be one of the slower parts of the whole process of making the cape.

Right, I'm off to eat some more cake - if it's in the house I'll eat it so might as well get it out of the way. Anything left on Friday is going back to Uni with L - he might need an extra holdall!

Posted with Blogsy
Posted by Jacq C at Tuesday, January 01, 2013